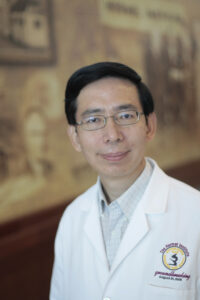 Taking aspirin reduces a person’s risk of colorectal cancer but the molecular mechanisms involved have remained unknown until a recent discovery by The Hormel Institute, University of Minnesota.

Researchers led by The Hormel Institute’s Executive Director Dr. Zigang Dong and Associate Director Dr. Ann M. Bode, who co-lead the Cellular & Molecular Biology section, discovered that aspirin might exert its chemopreventive activity against colorectal cancer, at least partially, by normalizing the expression of epidermal growth factor receptor (EGFR) in gastrointestinal precancerous lesions. EGFR is overexpressed in about 80 percent of cases involving colorectal cancer, the third-leading cause of cancer-related death in the United States.

Recently published in the open-access journal EBioMedicine, the Institute’s study revealed a previously unknown functional association between EGFR and COX-2 – an enzyme associated with pain and inflammation – during the development of colorectal cancer. The study also provides an explanation as to how taking aspirin can lower the risk of colorectal cancer in patients with familial adenomatous polyposis (FAP), a rare, inherited condition that causes extra tissue (polyps) to form in the large intestine that, if left untreated, almost always become cancerous by age 40.

For this study, The Hormel Institute partnered with Mayo Clinic researchers who provided tissue sections from recruited FAP patients who were classified as regular aspirin users or nonusers. Consistent clinical trial data strongly suggests that regular use of aspirin and other non-steroidal, anti-inflammatory drugs lowers a person’s lifetime risk of developing colorectal cancer.

Institute researchers found that COX-2 might drive the formation of tumors, at least in part, through the upregulation of EGFR. Given that, researchers believe EGFR might be a novel target for preventing colorectal cancer.

“We found that EGFR overexpression is an early event in the formation of colorectal cancer that can be greatly reduced by regular use of aspirin,” Dr. Zigang Dong said. “Our findings are highly interesting but more research is needed.”

A short commentary also published on EBioMedicine by Dr. Paola Patrignani of Italy’s “G. d’Annunzio” University of Chieti, highlighting The Hormel Institute’s latest paper while discussing the potential use of aspirin for cancer prevention.

“The accumulating data from randomized clinical trials provide the rationale to consider the potential role of daily aspirin use in colorectal cancer prevention and possibly other types of cancer,” Patrignani wrote in her commentary titled “COX-2 and EGFR: partners in crime split by aspirin.”

Some questions, however, need to be addressed, Patrignani wrote, before recommending the prophylactic use of aspirin for cancer prevention, such as whether the chemopreventive effect is dose-dependent and whether daily, low-dose aspirin affect other types of cancers in addition to colorectal cancer. Clinical studies should be performed, she added, to verify whether the coadministration of low-dose aspirin and possibly other antiplatelet agents may lead to overcoming the resistance to EGFR inhibitors in cancer treatment.

This latest research follows another paper published last December in EBioMedicine by The Hormel Institute’s Dong/Bode team related to colorectal cancer that provided a promising strategy for preventing and treating the disease. That study showed evidence that the TXA2 pathway also plays an important role in the processes leading to colorectal cancer, and it laid the groundwork for introducing a strategy to target TXA2 for colorectal cancer prevention, early detection and management.

While reliable biomarkers remain a serious issue for the early detection of colorectal cancer, The Hormel Institute’s findings in that study suggest that circulating TXA2 levels might have a potential prognostic or predictive value for detecting colorectal cancer early. Work is underway to further confirm the biomarker’s clinical performance.

This month, Dr. Zigang Dong also received a grant for more than $1.7 million over five years from the National Cancer Institute to continue his team’s supercomputer-assisted development of agents that are more effective and less toxic in preventing and treating colorectal cancer.

Through the use of The Hormel Institute’s two IBM supercomputers, Drs. Dong and Bode have discovered three small molecules highly effective at suppressing colon cancer cell growth by inhibiting β-catenin, an enzyme strongly expressed in many cancer cell types that promotes growth and tumor formation.