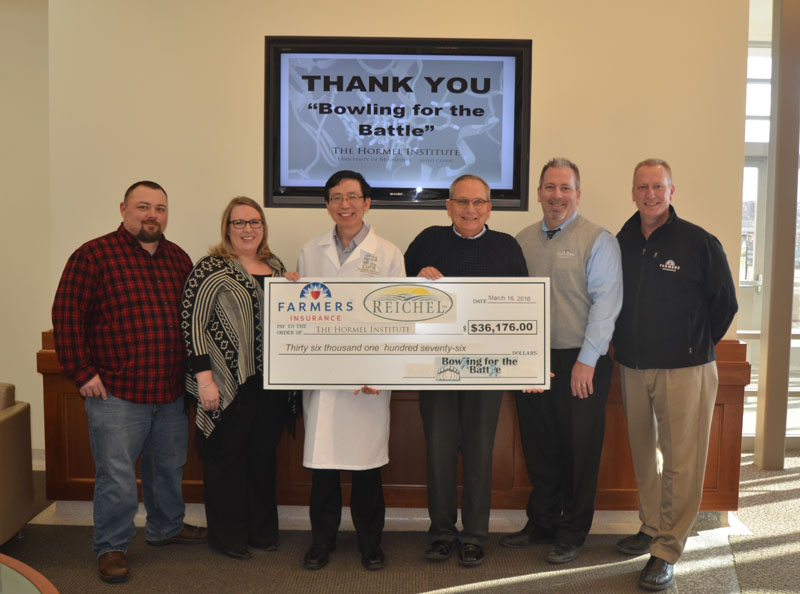 The hugely popular “Bowling for the Battle” fundraiser in Austin raised both awareness and a generous donation for prostate cancer research at The Hormel Institute, University of Minnesota.

A check for $36,176 was presented to leaders of The Hormel Institute from “Bowling for the Battle” organizers including Tom Gillard, Jim Benson, Pat Andreas and Laura Maschka (all from Farmers Insurance), and Jason Maschka. The donation included a $7,500 matching gift by Reichel Foods in Rochester for the March 5 event at Austin’s Echo Lanes bowling alley. As with every cancer research donation to The Hormel Institute, 100% of the funds will be used for research because of The Hormel Foundation’s annual support covering administrative expenses.

“We are overjoyed with the support we have received from friends, family, and the community,” said Laura Maschka. “With advances being made locally in cancer research, it inspires us to raise funds for something we are passionate about- finding a cure for prostate cancer.”

“Bowling for the Battle” drew 130 bowlers along with many others – nearly all decked out in blue, the color representing prostate cancer –  who watched the tournament and participated in prize raffles and auctions.

Last year’s event raised over $26,000 and was the first contribution to a new fund created in spring 2015 by The Hormel Institute’s Executive Director Dr. Zigang Dong to specifically support research into preventing and controlling prostate cancer – the most-common form of cancer diagnosed in American men, excluding non-melanoma skin cancers. Nearly half of The Hormel Institute’s 14 cancer research sections have projects ongoing related to prostate cancer.