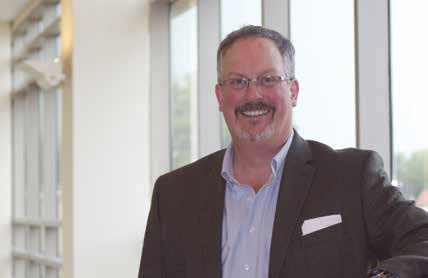 A recent research study at The Hormel Institute, University of Minnesota is providing insight into the regulation of chromosome segregation and the mechanisms used by cells to prevent them from forming tumors.

Dr. Edward “Ted” Hinchcliffe, leader of the Cellular Dynamics section, directed the research now featured in one of the world’s top scientific journals, Nature Cell Biology – released online Monday and to be published in an upcoming print edition of the journal. Nature journals have about 3 million online readers per month in addition to the top scientific community worldwide. Only important new advances and original research are published as either articles or letters in Nature Cell Biology.

Dr. Hinchcliffe and his team collaborated with Dr. Zigang Dong, Executive Director of The Hormel Institute. The research focused on cancer cells with abnormal numbers of chromosomes – a condition called aneuploidy – creating an imbalance in gene regulation. Aneuploidy is caused by mistakes in cell division, where chromosomes inadvertently become missegregated. Cells with too many chromosomes have an increased chance of expressing an oncogene (tumor-promoting gene), while those with too few chromosomes have the potential for decreased expression of tumor-suppressing genes. As a result, cells become cancerous.

Normal cells have a “fail-safe” mechanism that shuts down cell proliferation (growth and division) in the event of a missegregated chromosome. If a chromosome is misplaced during cell division, the cell automatically shuts down. This cellular “fail-safe” device ensures that abnormal cells never become tumors. The problem is, like all cellular processes, mistakes can happen. Understanding the molecular mechanisms that underlie the “fail-safe” is an important first step in unraveling the causes of cancer.

The current study by Drs. Hinchcliffe, Dong and colleagues reveals a new cell-signaling pathway that detects missegregated chromosomes, and directly down-regulates cell growth and division. Importantly, one of the molecules uncovered in this study is mutated in multiple cancer types, including certain pediatric brain cancers, bone cancers, and breast cancers.

Going forward, the researchers will continue to define the molecular players that interact to ensure aneuploid cells are stopped in their tracks.
“This is why we study basic cell biology,” Dr. Hinchcliffe said. “It can reveal key insights into the forces driving human disease like cancer.”

The featured work was supported through funds raised during Austin, Minnesota’s “Paint the Town Pink” initiative as well as grants from the US Department of Defense and National Institutes of Health.