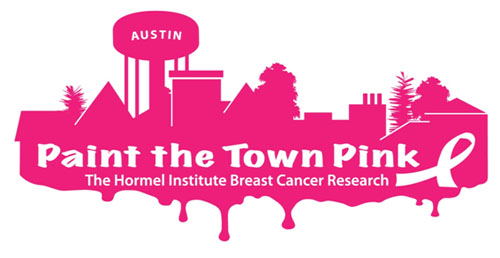 Paint the Town Pink is planning another record breaking year with favorite events returning and exciting new events such as an extreme long distance hot air balloon event joining the annual effort to support The Hormel Institute, University of Minnesota’s world-renowned breast cancer research.  This year the steering committee set a goal of $300,000 likely to bring the overall fundraiser to over $1 million raised since its start in 2011.

“These funds are extremely important and fund innovative research that otherwise could not be achieved,” said Dr. Zigang Dong, Executive Director. “The grants allow scientists to explore novel ideas and gather preliminary data leading to larger grants that make progress against cancer possible. We are extremely thankful to PTTP and those who support it.”
PTTP Director Kathi Finley and other leaders with the initiative announced a record breaking $300,000 fundraising goal for the 7th annual Paint the Town Pink, which will officially run from Jan. 30 to Feb. 12, 2017.

In recognition of October “Breast Cancer Awareness Month” on October 8th is the “Hunt for a Cure” pheasant hunt organized by the Mower County Habitat & Pheasants Forever, Hoot’N’Ole’s Bean Bag tournament and on October 19th Runnings’ “Ladies Night Out.”  Other PTTP events are held by sports teams, organizations and businesses throughout the year, such as Thrivent Financial’s “Racing to Give” event at Chateau Raceway on July 8, 2016 that raised $1,161.

In 2016 Paint the Town Pink raised $272,000 was raised in Austin and communities that include Adams, Apple Valley, Brownsdale, Blooming Prairie and Rose Creek and through Sterling Drug, their 28 stores/communities.  Thanks to The Hormel Foundation, 100 percent of gifts given to The Hormel Institute fund cutting-edge breast cancer research, none to administrative expenses.

After raising more than $75,000 earlier this year for the 2016 Paint the Town Pink, the 5th annual Plunging for Pink polar plunge will gather again February 4th at East Side Lake for the highly popular event organized by the Austin Vision 2020 Waterways Committee. Fishing for a Cure will also be back again on February 11th at East Side Lake. The annual ice fishing event has raised over $67,000 for breast cancer research since 2009.

New this year will be hot-air ballooning events, with an opportunity for the public to see hot air balloons up close as well as have the name of a loved one read during an extreme hot air balloon ride.  Keep an eye out for more information on this exciting addition to the Paint the Town Pink event lineup.

Details for many other PTTP fundraisers – new and returning events – will be announced as plans are developed and finalized over the coming months. PTTP encourages new people and organizations to get involved and anyone interested in supporting the event should contact Kathi Finley (deadline is Jan. 25 for event to be included on the official PTTP calendar) at 507-460-0259 or by email at GoPTTP@gmail.com.

For all details on PTTP events, go online to The Hormel Institute’s website – www.hi.umn.edu – and click on the PTTP link at the top or go to Paint the Town Pink’s Facebook page at www.facebook.com/austinpttp.

Breast cancer predominantly affects women but also is diagnosed in men in about 2,000 new cases annually.  It is the most common type of cancer in the United States excluding nonmelanoma skin cancers and the second-leading cause of death by cancer, with more than 40,000 deaths estimated per year.