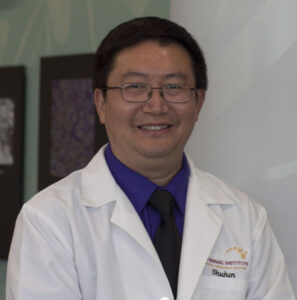 “We discovered the first evidence that RTKs are modulators of DNA methyltransferase (DNMT)-dependent DNA methylation in leukemia cells,” said Dr. Liu. “This is very significant because for the first time we could document that RTK inhibitors impair DNMT1 expression and reactivate tumor suppressor genes. Our discoveries unravel a signaling interaction between RTKs and DNMTs in the development of leukemia and potentially, across different types of cancer,   shedding light on molecular basis of epigenetic deregulation and cancer pathogenesis.”

These discoveries are critical because aberrant DNA methylation is a key hallmark of cancers, and RTK dysregulation frequently occurs in human malignancies. Although conventional inhibitors for these abnormalities are widely used in current cancer therapy, the expected outcome for cancer patients remains dismal.

Dr. Liu’s research highlights the RTKs as unappreciated epigenetic targets, and offers a promising avenue to utilize RTK inhibitors, in a single or combination form, to benefit the patients characterized by aberrant DNA methylation including those who relapse from current epigenetic therapy.

“We identified new types of DNA agents, which open an entire new window of targeted cancer therapy and significantly expand the pool of DNA methylation inhibitors. Our hope is this will prevent cancer from progressing and help protect and extend human lives.”