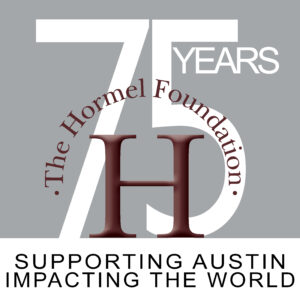 Community will be richly impacted with another $8.2 million in gifts

“It is a tremendous opportunity to every year be able to strengthen people in our community through support given to key local organizations,” said Gary J. Ray, chair of The Hormel Foundation.

“Thanks to the continued success and innovation of Hormel Foods,  people around the world benefit from funds managed and distributed by The Hormel Foundation to help local organizations carry out their important missions.”

“The relationship between Hormel Foods, the Foundation, and the community is an amazing three-step engine. Every time I think about how Hormel’s dividends power the Foundation’s ability to support the community and how the community supports Hormel Foods’ continued success, I am struck by the vision of George and Jay who created this virtuous circle over 75 years ago. We continue to benefit from their foresight,” said Ray.

“It’s one of the great privileges of my life to play a small part in making sure the process remains vital and relevant as our community continues to grow and prosper.”

About The Hormel Foundation

The Hormel Foundation supports the community through organizations that provide food, shelter and clothing, advance quality healthcare, education and research and enhance the quality of life through projects such as the newly completed Jay C. Hormel Nature Center Interpretive Center and the Austin Community Recreation Center project now underway.