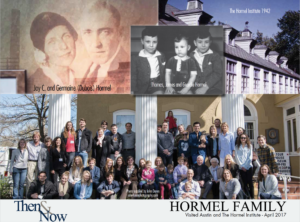 The Hormel Institute sends deepest sympathies to the family and friends of former US Ambassador James C Hormel who died August 13.

Born in Austin and son of the founder of The Hormel Institute, Jay C Hormel,  Mr. Hormel created a legacy as a leader for human rights activism and philanthropic efforts.

Mr. Hormel spoke at The Hormel Institute’s 2008 expansion celebration and visited the Institute again when the Hormel family held a reunion in Austin in 2017.

“We honor the memory of James Hormel and want to recognize the positive, important impact he had on our society,” said Dr. Robert Clarke, Executive Director of The Hormel Institute.  “Reflective of the spirit of the food company, Mr. Hormel was a pioneer and innovator, and we share our sympathies with his family and friends.”

About the Author: Jill Patterson