Wioletta Czaja (pronounced: chaya) is an assistant professor and leader of the DNA Repair and Genome Stability section at the Hormel Research Institute. Dr. Czaja received her B.S. and M.S. in Immunology and Virology Department from University of Maria-Curie Sklodowka in Lublin, Poland. She received her Ph.D. in the Department of Microbiology, Molecular Biology and Biochemistry at University of Idaho, Moscow, ID. She did the postdoctoral work in the School of Molecular Biosciences and Animal Sciences at Washington State University, Pullman, WA. After postdoctoral training, she was a research faculty in the Department of Biochemistry and Molecular Biology at University of Georgia, Athens, GA, where she established a cross-disciplinary research program investigating mechanisms of genome stability. In addition to research activities, Dr. Czaja taught number of undergraduate courses at UGA and delivered over 60 lectures/class sessions in Introductory Biochemistry& Molecular Biology, and Cell Biology.

Nearly all forms of cancer contain significant levels of genomic instability (high frequency of mutations, chromosomal rearrangements), resulting from deficient or dysregulated DNA repair processes. The molecular events leading to genomic instability are not well understood. We investigate the fundamental mechanisms protecting genomic integrity, with a special focus on the epigenetic and chromatin-based regulation of DNA damage repair. We are also working on development of new approaches enabling direct detection, and genome-wide profiling of damaged and modified DNA bases, with the goal of uncovering novel mechanisms involved in mutagenesis and carcinogenesis. The long-term objective of our research is to understand how stability of the human genome is maintained and regulated in various cells and tissues, and to apply this new knowledge to promote advances in novel anti-cancer therapy and personalized medicine.We employ complementary approaches in biochemistry, cell and molecular biology, genetics and genomics using fungal model organisms (yeast-Saccharomyces cerevisiae) and human cell lines. 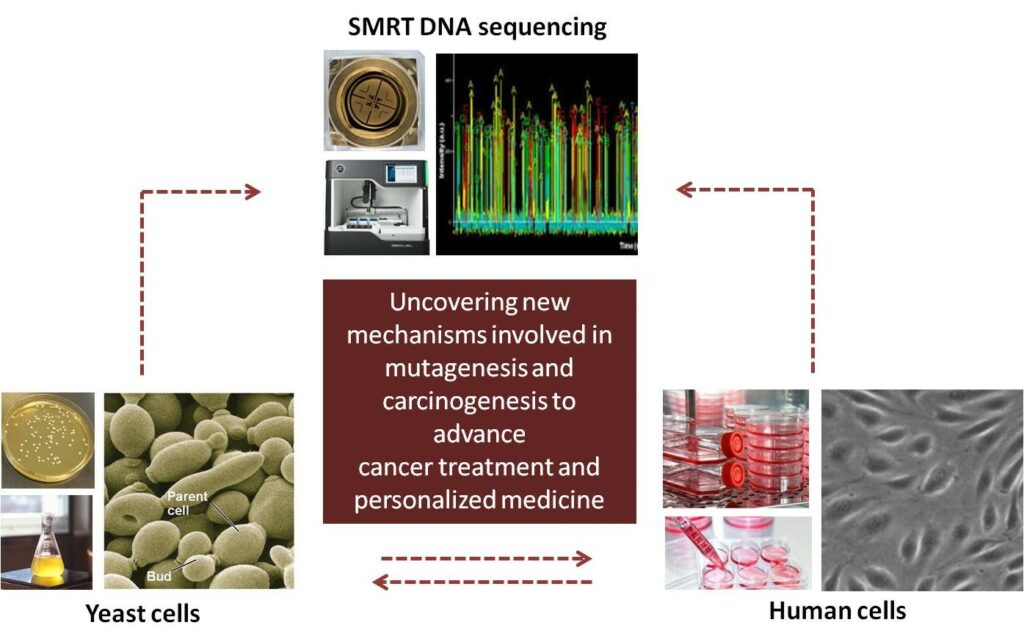 New tools in cancer risk identification and prevention; Development of new methodology ADA-SMRT enabling direct, genome-wide profiling of mutagenic alkyl DNA adducts. Alkyl DNA adducts are cytotoxic and mutagenic DNA lesions that arise from exposure of cells to numerous environmental carcinogens and cellular metabolites. Some of the most toxic alkyl DNA adducts are induced by commonly used anti-cancer drugs. DNA modifications induced by alkylating agents play significant roles in both the development and treatment of cancer. Persistent and inefficiently repaired alkyl DNA lesions can induce G→A transition mutations such as those often found in genes critical for malignant transformation, such as H-ras oncogene or TP53 tumor suppressor gene. DNA adducts induced by common alkylating agents predispose cells to malignant transformation. To understand how alkyl DNA adducts contribute to mutagenesis, cancer development and treatment, it is imperative to be able to examine complete, genome-wide profiles of these lesions and investigate how factors (such as modifications of chemotherapy agents, or the genomic and epigenomic landscape of the cell) influence initial adduct formation and repair. In collaboration with the University of Georgia, Athens, GA and Icahn School of Medicine, Mt. Sinai, New York, we are working on development of ADA-SMRT, a new methodology enabling direct detection of carcinogenic alkyl DNA adducts (ADA) by using SMRT DNA sequencing. The development of ADA-SMRT sequencing will enable, for the first time, direct and simultaneous high throughput mapping of various alkyl DNA adducts in eukaryotic genomes. This research will provide a framework for future investigation of the human genome and better understanding of the individual differences in cancer predisposition and response to chemotherapy.

Identification of new mechanisms of tumor suppression; Epigenetic (chromatin-based) regulation of DNA repair. DNA repair capacity vary considerably between individuals and between different tissues, highlighting involvement of genetic and epigenetic (chromatin-based) mechanisms in modulation of cellular toxicity to genotoxic agents. One of the major challenges in the DNA repair field is to understand how efficient DNA repair is accomplished in the context of highly compacted chromatin, which is inherently inhibitory to DNA repair processes. Our research in this area focuses on investigating the role of the chromatin remodeling factors in modulating the repair of the alkylated DNA damage via Base Excision Repair (BER). The Base Excision Repair (BER) is considered a fundamental tumor suppressor pathway in all cells, and is an attractive target in novel anti-cancer drug discovery. However, unlike other DNA repair pathways, the chromatin-based regulation of BER has been substantially understudied. In human cells, robust and tightly regulated BER is essential for the efficient repair of alkyl DNA adducts and protection of cells from the accumulation of mutations and malignant transformation. Dysregulation of the BER pathway (BER imbalance) is thought to drive carcinogenesis and contribute to chemoresistance. Previously we identified a link between the essential SWI/SNF (SWItch/Sucrose Non-Fermentable) chromatin remodeler and the BER of alkyl DNA adducts in yeast cells. Currently we investigate the BER in human cancer cells deficient in the SWI/SNF. The human SWI/SNF remodeler is frequently mutated in 20% of cancers, raising the possibility that loss of SWI/SNF function might lead to aberrant, imbalanced BER in SWI/SNF-deficient cancers. These studies will elucidate new chromatin-based mechanisms that modulate the responses of the human cells to chemotherapy alkylating agents, and will provide new insights for improved therapy of SWI/SNF-deficient cancers.