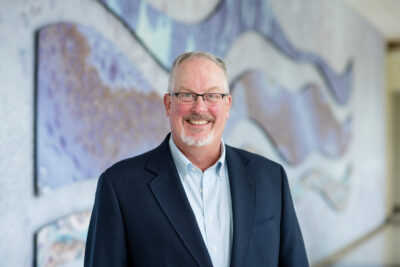 Edward H. “Ted” Hinchcliffe is a Professor of Cell Biology at the Hormel Institute. Dr. Hinchcliffe received his B.A. in chemistry from the University of Dayton, and his Ph.D. from the University of Minnesota in the lab of Richard Linck, where he worked on tektins and tektin-associated proteins. During that time he was a student in both the Physiology and Analytical Quantitative Light Microscopy (AQLM) courses at the Marine Biological Laboratory in Woods Hole, MA. Dr. Hinchcliffe was an NIH NRSA post-doctoral trainee and American Cancer Society Senior research fellow in the laboratory of Greenfield “Kip” Sluder at the Worcester Foundation and University of Massachusetts Medical School, in Worcester, Mass. There he studied centrosome duplication and cell cycle regulation. In 2001 he joined the biology department at the University of Notre Dame as an Assistant Professor, where he received a Research Scholar Award from the American Cancer Society. In 2008, Dr. Hinchcliffe joined the University of Minnesota’s Hormel Institute as an Associate Professor. In 2016 he became Professor of Cell Biology, Head of the TCBG Research Group, and Assistant Director of the Institute. In 2018, Prof. Hinchcliffe was named the I.J. Holton Endowed Professor of Cellular Dynamics. From 2002-2010, Dr. Hinchcliffe was an Instructor in the AQLM course at the MBL in Woods Hole, Mass, where he taught digital image processing and live-cell imaging.

An amateur photographer, adventuresome cook, and avid cross country skier, Ted is also an ex-rugby player who follows the International game whenever and wherever he can find it.

The role played by aneuploidy in generating tumor cells

Mitotic spindle assembly, and the regulation of chromosome segregation

The role of bioactive sphingolipids in cell signalling and membrane architecture