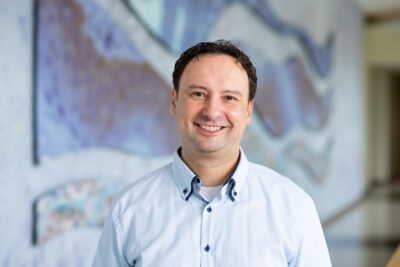 Rafael Contreras-Galindo is an Assistant Professor and leader of the Genome Instability and Chromosome Biology section at The Hormel Institute, University of Minnesota, who began on April 1st 2019. Rafael received a Ph.D. from Ponce School of Health Sciences in Puerto Rico where he studied in the AIDS Research Program under the direction of Yasuhiro Yamamura. Rafael’s first research focused on investigating the expression and replication of Human Endogenous Retroviruses, repetitive elements that comprise 8% of the human genome. This field was poorly studied at the time with confusing nomenclature of retroviruses and lack of uniform technology. Rafael discovered endogenous retroviruses viral particles in the blood of HIV patients that has the ability to replicate at some extent. He completed a post-doctoral fellowship in the lab of David Markovitz at the University of Michigan where the focus was endogenous retroviruses and cancer biology. He discovered thousands of endogenous retroviral sequences in the centromeres and start using them as markers to study centromere biology, a repetitive area of the genome that have been hard to annotate and study.  Rafael is originally from Bogota, Colombia, and has a research interest in investigating the repetitive regions in the human genome, in particular centromeres and telomeres. He studies how the instability in those areas of the genome effect the function of chromosomes in healthy cells and disease processes.

2003-present:   Member of the American Society of Microbiology (ASM)

My research interests are focused on investigating the function of repetitive areas of the human genome. I have a special interest in centromere genomics. The centromere is the structural unit responsible for the correct segregation of chromosomes during cell division. Destabilization of centromere function results in chromosomal mis-segregation and instability, hallmarks of fibrosis, cancers and birth defects. I am investigating the structure and evolution of centromere sequences, the epigenetic interactions of chromatin factors that modulate centromere function on centromere sequences, and the role these elements play in chromosome segregation and genome instability in non-disjunction disorders, cancers, and fibrosis.Human Centromere Genomics

My research has been focused on investigating Human Endogenous Retroviruses, repetitive elements that comprise 8% of the human genome. During these studies, we discovered and characterized thousands of endogenous retroviruses of the HERV-K family, in particular the types K111 and K222, which reside in the centromeres of the human genome (Contreras-Galindo et al. 2013; Zahn et al. 2015). These findings are giving us the opportunity to study human centromere genomics, regions of the human genome that have been extremely difficult to annotate because of the repetitive nature of these areas, and therefore, remain a last frontier of human genetics. Sequence analysis of centromere K111 and K222 retroviruses revealed that, surprisingly, human centromeres have been under continuous reshuffling during evolution and exchanged genetic material at rates higher than other areas of the chromosomes. We are also characterizing other centromere repetitive elements, the so-called alpha repeats, which are the main arrays of repetitive elements in human centromeres and that are found in a unique structure in each human chromosome. In the last years I have annotated centromere sequences to fill the gaps of human centromere maps. This is very important for human genomics, as recent evidence from our lab and other investigators has indicated that specific alpha repeats recruit centromeric chromatin factors that assemble the kinetochore. With the support of a Career Development Award K22 by NCI we have identified markers for multiple centromere arrays in each human chromosome and developed molecular tools to study these elements. We have studied the composition of centromeric sequences, their genetic variation in human populations and identified functional elements in the centromeres of each chromosome that modulate centromere assembly and function. We have discovered centromere markers for each human chromosome except for Chr 19. Using these markers, we have identified startling evidence of extensive centromere DNA instability in disorders characterized by chromosome mis-segregation such as trisomy 21, as well as scleroderma fibrosis and cancers. We plan to study the effect of centromere instability in centromere function and chromosome instability in these diseases.

We are studying which centromere alphoid arrays in each human chromosome are packed into nucleosomes by the histone 3-like centromere mark CENP-A and recruit other centromere proteins (CENP-B, CENP-C, and so on) that participate in kinetochore assembly. Further, we are also characterizing which centromere sequences are essential to maintain the cohesiveness of sister chromatids during cell division through epigenetic factors HP1 and H3K9me3; factors that ensure the correct partition of chromosomes. We have developed ChIP-PCR and ChIP-Seq methods to assess this task. We have elucidated which centromere arrays in each human chromosome bind proteins that recruit kinetochores, as well as sequences in the centromere flanks that keep sister chromatids together. These novel findings are reported in a recent manuscript accepted for publication in the journal Genome Research. It is very important to understand how the deposition and assembly of centromeres as well as cohesion function is influenced when centromere sequence mutations arise. We are employing CRISPR Cas9 to mutate centromeres. We are studying whether mutations in centromere elements as we have seen in disease alter the deposition of kinetochores towards juxtaposed arrays that remain intact and/or create neo-centromeres in other areas of the chromosomes. The hypothesis is that that mutations in the centromere sequence will affect the balanced deposition of centromere chromatin marks. We anticipate that mutation of centromere elements will displace the occupancy of CENP-A, CENP-B, and/or H3K9me3 toward other elements, affecting centromere/pericentromere architecture, and therefore, chromosomal segregation. We predict increased occupancy of centromere marks on ectopic chromosomal arms with the establishment of neo-centromeres as the original centromere mutates and becomes inactive. These technologies will generate unprecedented findings in the study of human centromeres in disease.

Using molecular tools to study human centromeres, we made made the observation that in contrast to the size of centromere elements detected in healthy cells, significantly smaller centromere arrays are found in the genome of most cancer cells studied, including breast, ovarian, and prostate cancer, lymphoma/leukemia, and teratocarcinoma. This suggests that cancer cells, which display extensive chromosome ploidy, exhibit profound centromere instability. Interestingly, the loss of centromere retroviruses K111 at the pericentromeres, specifically in adult T-cell leukemia/lymphoma (ATL) cell lines, for example, was the result of recombinational deletion among K111s. In other cancers, deletion of some centromere retroviruses resulted in selection of new mutant centromere retroviruses. Currently, I am recreating these mutations occurring in cancer cells in chromosomally normal human cells using CRISPR Cas9 and Cre-LoxP to determine the effect of centromere instability on centromere assembly and function and chromosome segregation. These studies will help us to understand the role of centromere deletion in genome instability and aneuploidy seen in cancer. We are studying the effect of centromere mutations in genome instability/aneuploidy, cell growth and proliferation, differentiation, and cell transformation. We will expand these observations in vivo using nude mouse models transplanted with cells with centromere defects.

We have found extraordinary evidence of centromere instability specifically in the centromere core and pericentromere of Chr 21 in individuals with trisomy 21 (Down syndrome) but not other chromosomes, suggesting that centromere 21 instability is associated with this Chr 21 non-disjunction disorder. We are creating specific deletions in the centromere of Chr 21 in karyotypically normal cells and human embryonic stem cells (hESc) using CRISPR Cas9 technology in order to characterize the effect of these genetic imbalances in centromere function and Chr 21 segregation. We are also using cytogenetic analysis, including IF-FISH and other assays for chromosome segregation to study the effect of centromere 21 mutations in trisomy 21 development and also in the development of disease-associated phenotypes seen in different cells types of patients with trisomy 21.  We are creating centromere 21 mutations in iPSc that differentiate into brain cells to study the effect of centromere instability in trisomy 21 brain development and Alzheimer. Some of these findings are shown in the journal Genome Research.