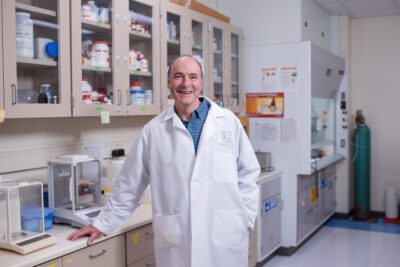 Eukaryotic cells, including human cells, surround themselves with bilayer membranes, i.e. thin, flexible layers that are only two molecules thick. The molecular building blocks of bilayer membranes are specialized lipids that are polar and nonpolar at their opposite ends. Bilayer membranes also serve as internal partitions to enable formation of functionally-specialized compartments within cells. Interestingly, there are many more varieties of lipids found in membranes than are needed to form bilayers. What is now clear is that certain membrane lipids can function as messenger signals that regulate cell growth, proliferation, inflammation, and programmed cell death processes, while other membrane lipids appear to cluster together in bilayers to form microdomains that regulate the spatial distribution and lateral interactions of membrane proteins. The discovery of these membrane lipid functions underscores why cell membranes so often come under direct attack during cancer and infectious disease.

Our research focuses on membrane lipids known as sphingolipids and on proteins that interact in non-enzymatic fashion with sphingolipids. Such proteins include sphingolipid transfer proteins that function as transporters to shuttle sphingolipids between intracellular membranes as well as lipid-binding domains (e.g. C2-domains) that act as targeting and anchoring devices for certain kinds of sphingolipids embedded in membranes. We began investigating sphingolipids many years ago as findings began to emerge showing that certain sphingolipids form ‘raft’ microdomains in membranes containing cholesterol. Rafts appear to function as organizing regions for signaling kinases as well as target sites for certain viruses and bacteria. In earlier investigations, we focused on rigorously defining the physical basis for raft microdomain functionality. To gain insights into lipid structural features that control both the lateral and transmembrane distributions of sphingolipids, we have used a combination of biophysical approaches (fluorescence spectroscopy, Langmuir surface balance approaches, calorimetry, NMR). We developed ways to quantitatively measure the lateral elasticity within model membranes, to accurately assess the physical changes that occur within the ‘raft environment’ when the content and structure of sphingolipids and sterols become altered (collaboration with Howard Brockman lab; UMN-Hormel Institute), as well as assess changes in sphingolipid lateral and transbilayer distributions. Our research elucidated sphingolipid structural features that regulate their interactions with other membrane lipids and provided insights into the unique physical features at the heart of the lateral organizing functionality of sphingolipid-enriched microdomains. The findings have proven to be important for current understanding how the spatial organization of lipids in membranes can regulate proteins that translocate onto membranes to function.

We have since focused our efforts on specific proteins that can bind and transfer sphingolipids between membrane surfaces and that may help formation and maintain ‘raft’ microdomains in cells. These sphingolipid transfer proteins were initially identified as glycolipid transfer proteins (GLTPs) due to their specificity for transferring glycosphingolipids between membranes. We began to elucidate the importance of GLTPs for eukaryotic cells by using PCR approaches to clone GLTPs from various mammals as well as plants and fungi. We also developed ways to use bacterial expression systems to produce sufficient amounts of the various GLTP proteins for enabling us to crystallize the proteins and determine the molecular structures of GLTP and related homologs both in glycolipid-free form and complexed with different glycolipids, in collaboration with the D.J. Patel lab at Memorial Sloan Kettering Cancer Center in New York and the L. Malinina lab at CIC bioGUNE in Derio/Bilbao, Spain. Our studies revealed precisely how GLTPs recognize and envelope glycolipids to accomplish intermembrane transfer and shed light on: i) how GLTP adapts to accommodate different glycolipids within its binding site; ii) the functional role played by intrinsic tryptophan residues in glycolipid binding and membrane interaction; iii) the structural basis for the more focused glycolipid selectivity of a fungal GLTP ortholog as well as the GLTPH domain of human FAPP2. Notably, our work revealed that human GLTP forms a novel structural fold among known proteins leading the Protein Data Bank to designate the human GLTP-fold as the founding prototype of the GLTP superfamily. The initial findings were published in Nature and PLoS Biology, with subsequent studies appearing in Structure, The Journal of Biological Chemistry, Biophysical Journal, Biochemistry, and Journal of Lipid Research. Nearly all of these studies benefited from collaboration with J. G. Molotkovsky at the Shemyakin Institute of Bioogranic Chemistry at the Russian Academy of Science. More recently, we reported in Nature the discovery and structural characterization of a new GLTP structural homolog in human cells in collaboration with Dinshaw Patel at Memorial Sloan Kettering Cancer Center in New York. Remarkably, the lipid specificity of the new protein has evolved for binding and transfer of ceramide-1- phosphate rather than glycolipids even though the new protein still forms a GLTP-fold but encoded by a completely different gene than GLTP. Thus, the protein is named ceramide-1-phosphate transfer protein (CPTP). In collaboration with Ted Hinchcliffe (UMN-Hormel Institute), we tracked the location of CPTP in mammalian cells using state-of-the-art fluorescence microscopy approaches. In collaboration with Charles Chalfant at Virginia Commonwealth University, we showed that depletion of CPTP levels in human cells by RNA interference leads to over-accumulation of newly synthesized ceramide-1-phosphate in the trans-Golgi. The over-accumulation triggers cytoplasmic phospholipase A2 action, to generate arachidonic acid that then is further metabolized into pro inflammatory eicosanoids. Recently initiated studies of human cytoplasmic phospholipase A2 (cPLA2α) are now being carried out in collaboration with the same talented collaborators. The goal is to determine the molecular basis by which cPLA2αcan initially promote inflammation but then subsequently help reverse and resolve this pathological process. By applying our multipronged cell biological and biophysical approaches, we expect to gain insights that drive new treatments for sepsis and inflammation associated with other pathologic conditions such as cancer, diabetes and dementia.

In related studies involving the model plant, Arabidopsis thaliana, published in Cell Reports, and carried out in collaboration with John Mundy at the University of Copenhagen and Dinshaw Patel at Memorial Sloan Kettering Cancer Center, we showed that disruption of a gene, known as acd11, accelerates cell death via mutation of a plant GLTP ortholog (ACD11). X ray structures revealed that ACD11 is a GLTP-fold evolved to also bind and transfer ceramide-1-phosphate. Disruption of the acd11 gene impairs plant development by severely altering ceramide-1-phosphate and ceramide levels to drive the programmed cell death response. The involvement of ACD11 in this process stimulated further studies of CPTP in human cells which recently have shown that CPTP functions an endogenous regulator of autophagy and of inflammasome assembly that drives interleukin release (IL1B and IL18). The report describing this work is currently in press in Autophagy.

We anticipate that elucidation of the fundamental structure-function relationships governing GTLP and CPTP action will facilitate development of the means to pharmacologically modulate GLTP and enhance their potential use as biotechnological resources, i.e. nanotools, for targeted manipulation of cellular sphingolipid composition. Such strategies could provide new ways to introduce specific sphingolipid antigens to help achieve the targeted destruction of cancer cells via immunotherapeutic means, and lead to new therapeutic approaches to treat disease processes involving sphingolipids. The exciting progress to date emphasizes the need for continuing studies into the workings of GLTP, CPTP, and other proteins containing GLTP-like motifs using comprehensive strategies involving biophysical, cell, and molecular biological approaches that we have recently reviewed in Quarterly Reviews of Biophysics and Annual Review of Biochemistry. Our investigations of the gene organization and transcriptional status in humans and other mammals provide a firm foundation for identification and characterization of inherited diseases involving GLTP and CPTP. Our efforts benefit from continuing collaborations with Memorial Sloan Kettering Cancer Center in New York, The Russian Academy of Sciences in Moscow, Virginia Commonwealth University in Richmond, The University of Copenhagen in Denmark, the Mayo Clinic, and CIC bioGUNE in Derio/Bilbao, Spain. Our research continues because of generous financial support received from the NIH National Institute of General Medical Sciences, the NIH National Heart Lung and Blood Institute, the NIH National Cancer Institute of NIH, the Paint-the-Town Pink Initiative of southern Minnesota, and The Hormel Foundation. For more details regarding the research expertise and scientific publications of our lab, please visit the following web sites: